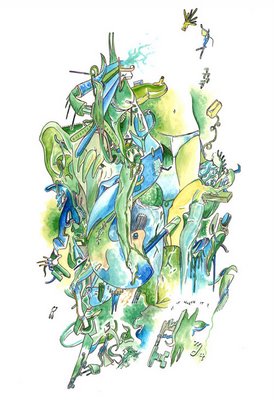 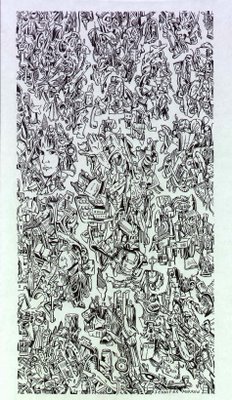 When i was 19 i had an unhealty obsession with
Jennifer Jason Leigh.

What To Do With Me 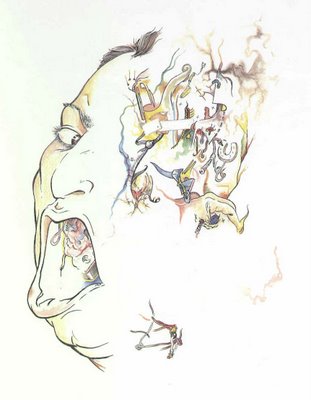 "What To Do With Me"

Take me out with Fridays trash.
Place me low on your top 5.
Make me wait.
Have me listen to your terrible taste in music.
Strip me of my small time esteem.
Call me only when you need something.
Hammer the pin down deep.
Give me the advice I never asked to hear.
Push me off the subway platform.
Flush. 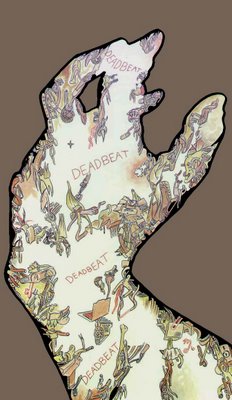 Here comes the water. Hands up. 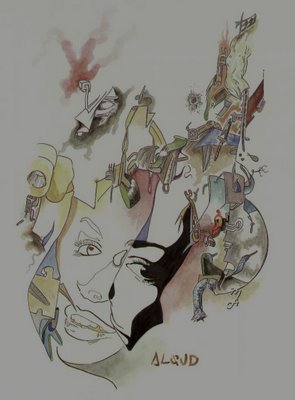 I made Aloud directly after the Mocca Comic Convention two years ago. Conventions tend to make me crazy. Too many eyes, ears, and opinions. Don't get me wrong, I'm there to show off my artwork/ both comics and paintings. I just can't help but feel like a target for criticism. After all I am putting myself out there. Not easy for someone who is exposing his insides.

Drawing comics to me is hard work. Turning a complicated script into something fun or interesting can be tough. Deadlines can literally make you sick with worry. The competition alone scares the shit out of me. Everyone and their mother wants to create a comic book... or draw Spiderman.

Painting the way I do there are no rules, save one: Being true to myself. Total freedom to express whatever I want. It's my own unique voice. One I flaunt aloud.

By the way, can you identify the face in this piece? It belongs to an actress.

You'll soon be able to see both sides of my artwork at marcodileonardo.com which will be launching in a few weeks. Stay tuned. 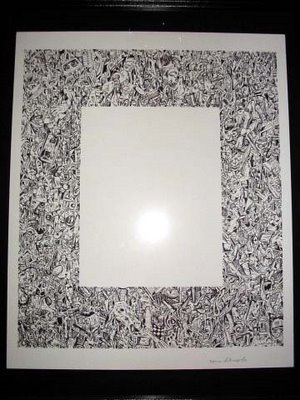 This piece hangs in the hallway of my apartment. I usually don't frame originals, but this one is another favorite with personal significance.

Insatiable has never been copied. Unlike most other pieces, this one is truely one of a kind. I tend to make prints to sell or to give to friends. Just another way to share the love.

Set my head on fire. Hot robotic desire. Work all day doing nothing. Quit my job to save my life. Turn my back to the world.

Ashamed in wanting something different. 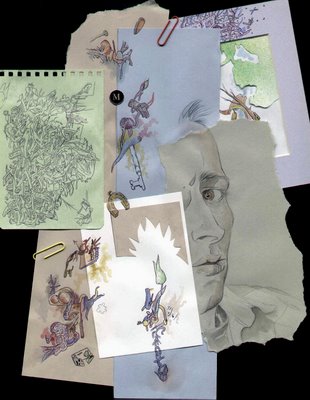 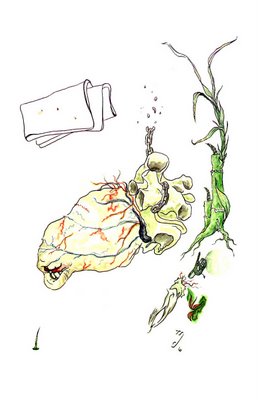 Is this how it's supposed to be? 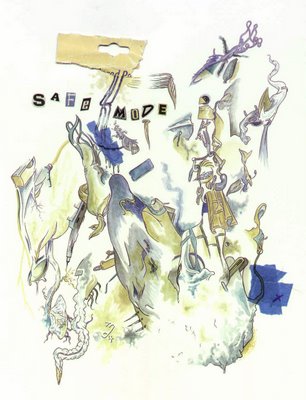 Don't go out at night. Stay in your warm bed.

Play by day. Let the sun keep you safe. 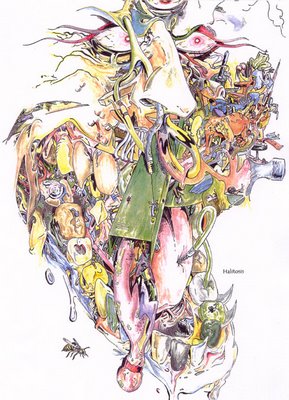 Inspired by a dream about an itchy cat who scratched his head off. It smelled so bad, or was that my breath.

The Hole I'm In 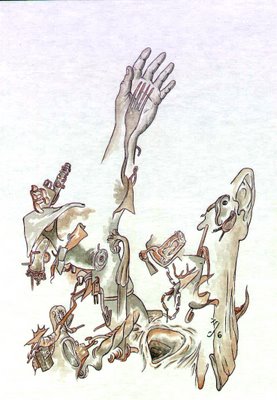 Everything pulls you down and you just want out. 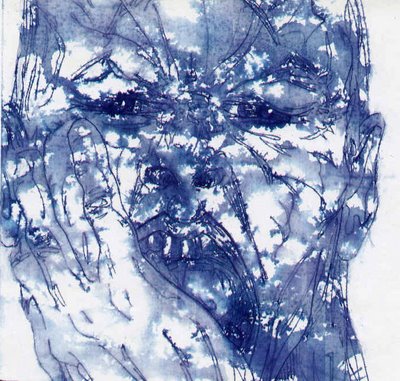 Shut the door. I don't want you to see me this way. 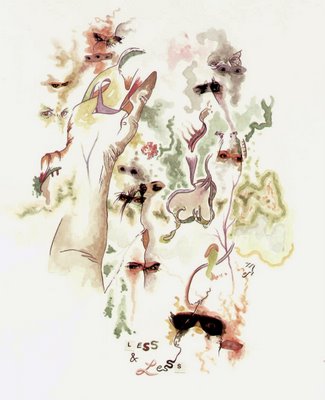 Less and Less deals with the deterioration of desire.

The eyes we see here are all cut out of a magazine, with the exception of two pair. 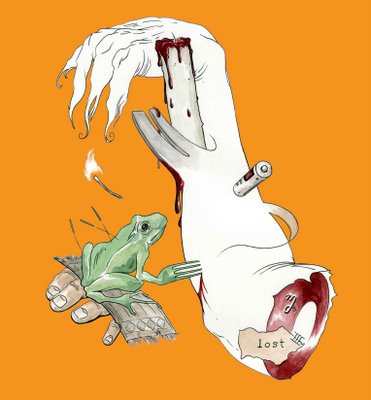 Originally Lost was made in 2001. I wasn't comfortable with the way it looked. It was too muddy and frightening. The idea was there I just needed to simplify it. So I made a second version in 2004.
The second version wasn't on the mark either. The frog looked too realistic, which was something I wanted to stay away from. I think the third one is better.

Hopefully this is the last version of this one, though I'm not happy with the solid orange photoshop background. 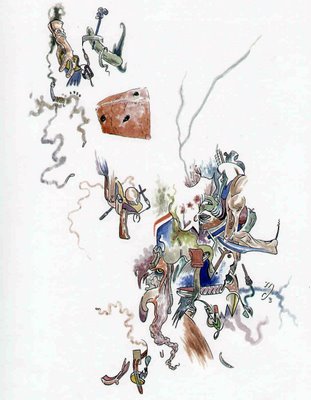 I didn't paint much in 2003. I was busy working on my comic books. So this one come out of nowhere and is very different from the other pieces.

It comes from , dare i say, a light hearted peaceful place. 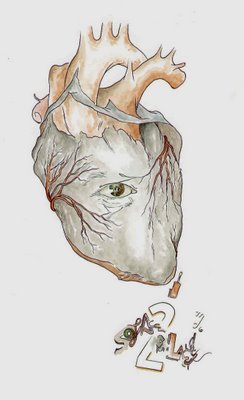 Look at how far you've come. Is this what you wanted? 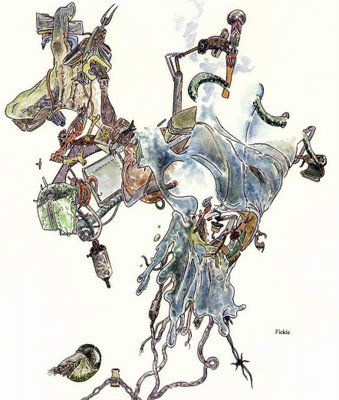 The nautilus has always been one of my favorite mollusks. Might be something about it's protective spiral shell. 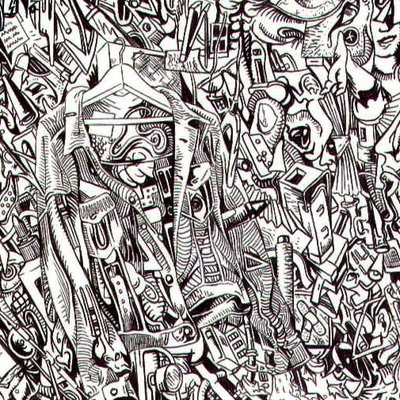 This is a close-up from one of my earlier pieces called Trivial Cancer- Lust Was Stronger. I zeroed in at the lower left to show a hidden symbol, a jacket. It's there in all that inky mess symbolizing warmth, safety, and a terrible fashion sense.

I've done a bunch of pieces where I hid objects for people to find. Paying homage to Where's Waldo or The Magic Eye. 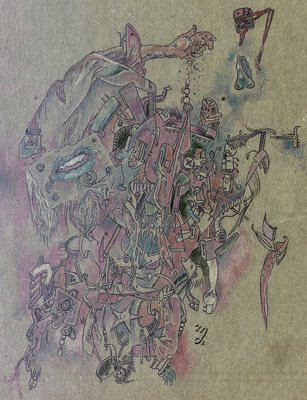 Done on cardboard, Facelift is one of those pieces i've always kept in my portfolio. It breaks up all the white negative space I typically use.

Unfortuately scanning this piece made it lose much of it's appeal. Like many other works, the originals always look more colorful, less flat and vibrant.

It lacks what it once had. Needs a facelift. 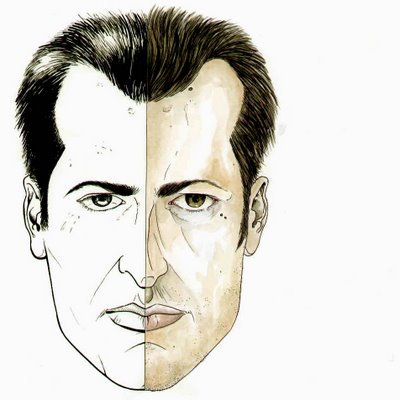 When we were working on a website for my artwork this image was supposed to be the at the center of the home page. As it turns out I was a bit uncomfortable about using my face as the first thing you'll see when going to marcodileonardo.com

The basic idea here is that there are two parts to the web site. The comic book art section which is black and white, and the abstract paintings section which would feature the painted side on the right.

We scrapped the idea because I hate showing people just how vain I truly am. Also because this piece is ugly a shit. 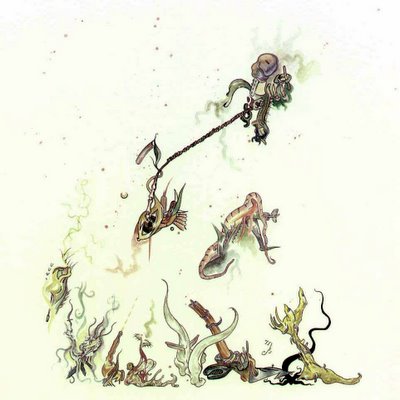 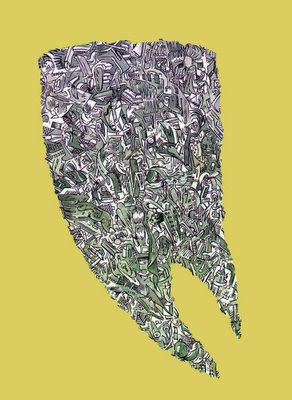 Screwing around with greens. 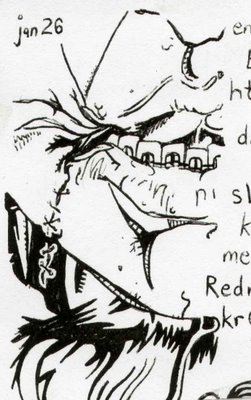 I had this awful sketch book when I was away back in '97. Back then I did a page a day. I've always used sketch books as an illustrated diary of sorts. This just happens to be the initial idea that popped into my head early that day.

It's a small section off the top left of the page. Usually, when working in sketch books, I start my drawings in that corner. To me this tiny image is golden. It sums up the way I was feeling then. I still remember it today just by looking at this image.

By the way, the rest of that page is rubbish.

The Courage To Fuck Things Up 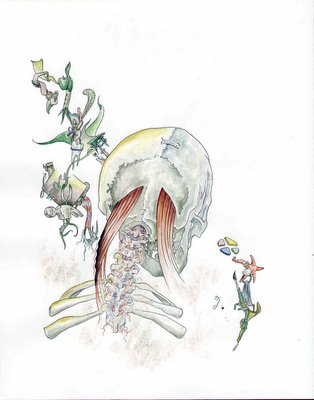 "The Courage To Fuck Things Up"

Just a mess in every way. Confused and willing to make mistakes.

Balls but no backbone.

Hate. Based On Nothing 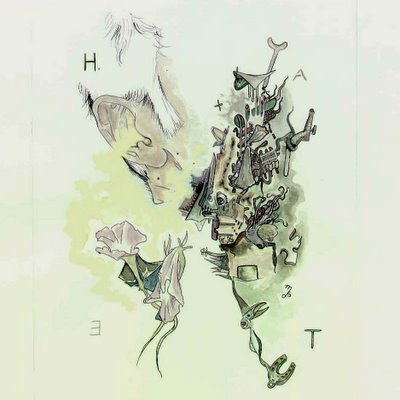 One flower lives. Another dies. 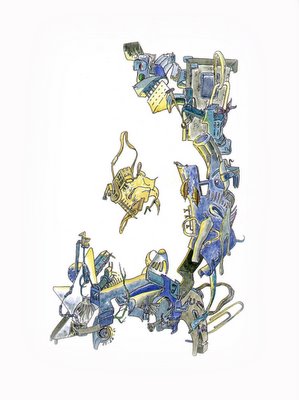 Sometimes something comes along and changes everything. Every part of your life is affected. You're not sure if it's going to help you or hurt you. You just let it come.

You bend for it. 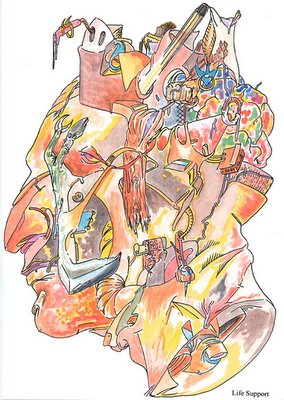 What keeps you going? If they were to scan your thoughts what would they find?