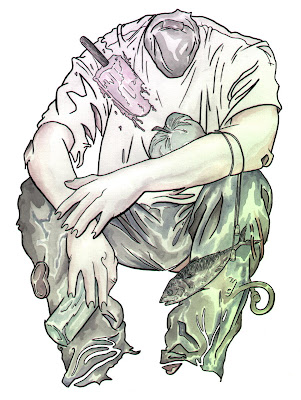 "Uninvolved"
April 2009
Another apology is in order. I grow tired of my own lies. The ties that binds will soon collide. That fatal flaw will finally put me over. Right there in the middle. The core of my being put to the test. Yet I never promised. That's not something I do. You'll hold it against me. To stick it in my craw. Then bleed me some more.
I've let go and spiraled out for too long. Uncoiled, unchecked, and untamed. I learned by listening to you. Yet I never said a thing. I quit that too. You sweetly slid and melted down my shoulder and held yourself up against my chest. Looking up you say some nonesense. Then I remind you there's a lie in believe.
# posted by Marco DiLeonardo @ 8:11 PM 3 comments 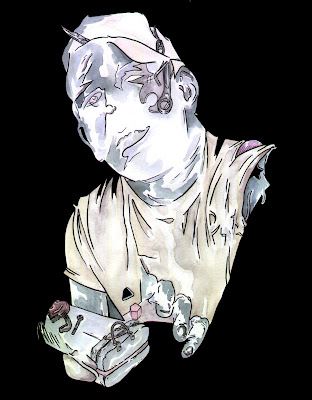 "Grooming"
April 2009
Honestly, honesty is Bianca's biggest problem. She knows if she started telling the truth now she would not be able to untie all the cables that keep everything she constructed together. It would mean more destruction and greater casualties. "Who's Left", she would ask herself. Is it just Gary? Paralyzed with fear she couldn't even tell Gary what it was that had happened. She wouldn't even tell us. Somehow we managed to find out that this horror story had something to do with Ursula. Still Bianca was vague and mentioned how we shouldn't know. Her holier than thou attitude had her acting like it was something we couldn't handle. As if we never created monsters in our time. Like we never burned bridges to our past leaving an angry trail of screaming betrayal in our wake. In truth, most of us haven't. But we demanded to know what happened anyay. Afterall this is what friends do. They find this kind of stuff out and use it to not fall into that same pitfall, or to pick themselves up and say, "How could she? I'd never..." and all that horseshit.
She claimed she was goaded to do something she didn't feel comfortable doing. Yet she wouldn't explain it. All she muttered was that it wasn't her desire to be that way and that it didn't fit. "It never fit", she said. She simply paniced and wanted to run away. Not that she was capable. Not away from this city. Not with Ursula being an outsider and all. There must have been something Ursula did or said. Maybe it was something she was waiting for. Ursula always found a way to get what she wanted. And why not? She was cunning and methodical. Someone with Bianca's character would quickly wilt to Ursula's presence. Certainly it seemed like Bianca wasn't pushed by the way she described her own disappointment in herself. No, not pushed but rather pulled slowly by invisible strings. Strung along and groomed to do the things that were indirectly asked. Told to feel something that belonged to another players painful back story. Punishing her for not living up to the ideal that was earlier set. Embossed on the road to read, "This is what you said verbatim. Isn't it? Isn't it exactly what you said?" To finally expose the liar that Bianca was. To have her fold like so many others who were brought to justice. Justice, because she lied.
The last time I saw Bianca she and Gary were planning some sort of holiday vacation get away thing. Bianca had this urgency about her these past few months. She wasn't around much and no one ever confronted her directly about it. It wasn't that we didn't care. It was just that we didn't want to put her further onto the ledge's edge. You have to understand how she is. This wasn't her anymore. She's changed so much. Colorful and stylish turned into drab and stealthy. Even her voice had changed. For God's sake she was the standard once. She made it a point to make shit work. Every detail was handled professionally. It would take her time and money to get her look together. She would get a manicure every week like clockwork. Now there's blood under a few of her fingernails. Gary always told her to not care about what other people think and most importantly to be fearless. He angrily whispered, "Nothing can touch you." The doubt would slide out from under her lips, nose, and ears. She was baffled with everyones solidarity and strength. Somehow it was unfathomable to her. She said something about how they aren't lies. It's something different. Something necessary. Then the last thing I heard her say was, "Everyone gets a piece, but no one gets the full story."
# posted by Marco DiLeonardo @ 3:43 PM 1 comments 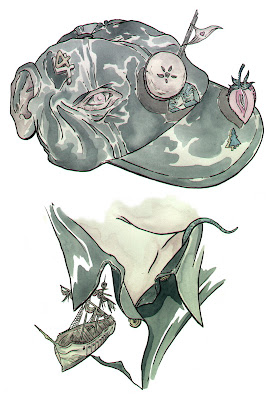 I'm on a date I'm not sure why I'm attending. Less of a laughable farce and more like a fatigued sigh. Somthing so much less ambitious than ever before. I'm not sure what to tell you or what you need to hear. You're still asking questions you think I want to answer. It's all prelude to another vexing compromise. The absolute opposite of where I want to be. Lately i've been so far from the life I've wanted. Wrestling with bad decisions and fickle swings. You wouldn't want to fit into this frustrating mess. I simply want a warm place to hide. A spot to slither into and die. To fast without hunger and sweat from dulling pain. Disappear deeper into a quieter white palace. Where there's no give or take. No push or pull. Lit up with only my sunken ships and deserted dreams. Watching failures who pass me by surface to success. It's just so depressingly funny. Laughing and couching to the tune of the end. That turning point when life completely changed. All because lust was no longer stronger.